Just two days after Bubba Wallace made a statement saying he felt NASCAR should ban fans from flying the Confederate flag at tracks, a ban has been permanently put into effect at all events and properties of the auto-racing giant.

On Sunday, Bubba Wallace, the only African American driver racing full-time in any of NASCAR’s top three series wore a shirt that said “I can’t breathe” in honor of George Floyd’s last words as he was killed on May 25th in Minneapolis. After Wallace wore the shirt for pre-race ceremonies and the national anthem, NASCAR held a moment of silence before the green flag as president Steve Phelps spoke to drivers and teams over the radio about racial injustice and the move for social change.

Tonight, Bubba Wallace will drive a car at Martinsville supporting the Black Lives Matter movement. Wallace’s Richard Petty Motorsports car will be all African American and feature a handshake on the hood and the words “Black Lives Matter” on the sides and “compassion, love, understanding” on both the front and back of the car. 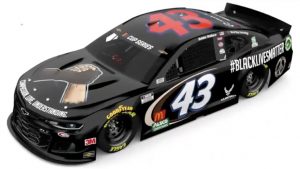 Rod Moskowitz, CEO of Prosport management shared his thoughts saying, “Seeing Bubba develop over the years from the NASCAR Drive-for-Diversity program, to becoming the first African American to win in NASCAR in nearly 50 years, to now leading the charge for change in our sport is satisfying in so many ways. I’m proud of him and also of our sport’s leadership and the steps they’ve taken this past week to create a more inclusive environment for our industry and fans.”

Kevin Liles, CEO and Co-Founder of 300 Entertainment and partner of Prosport Management commented “My partner, Rod Moskowitz in Prosport management has done an incredible job in guiding Bubba Wallace’s career through the NASCAR ranks. As the only African American NASCAR driver, Bubba continues to show his commitment and love for the sport while providing unwavering leadership to move the motorsports and our country forward. I applaud his principled stand on making sure diverse communities feel welcomed to any race in our Nation. Thank you Richard Petty Motorsports for your partnership and NASCAR for listening and acting responsibly. This is a great step towards a more inclusive NASCAR.​​​​​​​“

Wallace’s first NASCAR win came at Martinsville in 2013 when he won a Truck Series race at the track. His victory was the first NASCAR national series win for an African American driver since Wendell Scott won at Jacksonville in 1964.

About Bubba Wallace
Bubba Wallace became the first African American in 50 years to win in one of NASCAR’s top three national touring series. He reached the top of the sport when his made his Monster Energy NASCAR Cup Series debut at Pocono Raceway on June 11, 2017, becoming the first African-American driver to do so in over a decade. Bubba is now firmly established as one of NASCAR’s top young drivers with five series wins and he has become an inspiration for young racers and fans. Bubba started the Live To Be Different Foundation in 2017, aimed at breathing new life into individuals striving to achieve their goals, no matter their age, skin color, disabilities or ambitions.