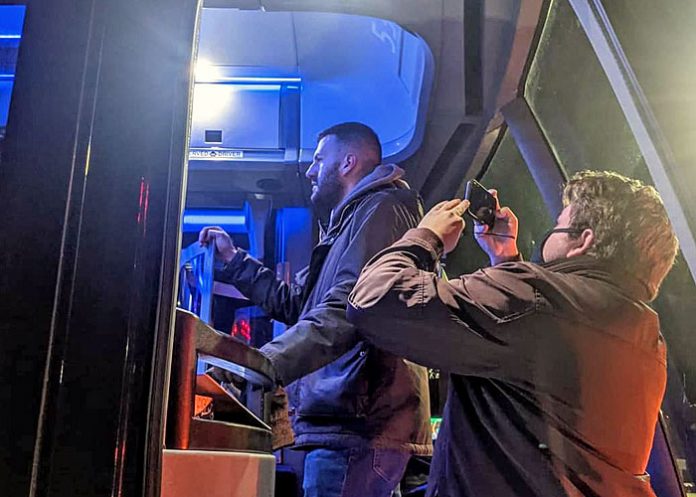 GOSHEN – State Assemblyman Colin Schmitt, a New Windsor Republican, was photographed speaking to a busload of people embarking to the US Capitol Wednesday morning.

As a result, Orange County Democratic Party Chairman Brett Broge is calling on Schmitt to “immediately resign” from the Assembly. “His judgment is impugned and he can no longer adequately represent the interests of Orange County residents,” Broge said.

The chairman noted Schmitt is a member of the Army National Guard who “swore an oath to ‘support and defend the Constitution of the United States against all enemies, foreign and domestic’.”

Broge called the rioting and storming of the U.S. Capitol “an act of domestic terrorism.”

Prior to the photo of Schmitt talking to the busload of people en route to Washington, he issued a statement saying, “I am deeply disturbed by the assault on the United States Capitol today. There is absolutely no justification for any form of violence against the pillars of our democracy.”

Broge discounted Schmitt’s statement saying, “he demonstrated shameful negligence this morning when he validated the violence conspiracy theories of his far-right supporters.”

New York State Minority Leader Will Barclay said, “The situation unfolding in Washington D.C. is nothing short of tragic. What we’ve witnessed today has no place in our country and should be condemned by anyone who considers themself a true American. Protests have always been part of political discourse, but the events at the Capitol have crossed every line imaginable. As a nation, we are better than this – and we need to show it immediately.”

New York Attorney General Letitia James released the following statement in response to the situation occurring at the United States Capitol, “The coup attempt initiated by outgoing President Trump has been despicable. Today, it became violent. If blood is shed, it will be on his hands. These actions, fueled by lies and wild conspiracy theories espoused by President Trump, must be unequivocally condemned by every corner of our society.

“Ultimately, I am confident the rule of law will prevail. Joe Biden, our duly elected president, will assume office on January 20th and history will remember this as a sad but unsuccessful attempt to destroy our democratic republic.”