“The Purple Heart Commemorative Coin is a big win for the Hudson Valley and Purple Heart recipients across America,” said Rep. Maloney. “This bipartisan legislation is the result of years of hard work. It not only honors our veterans but also brings business to the West Point Mint right here in our backyard. I am humbled to have passed this legislation through the House and Senate and into law.” 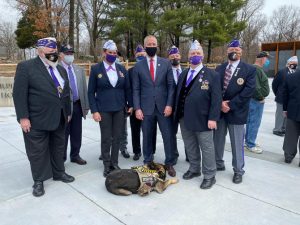 “The National Purple Heart Commemorative Coin will be an extraordinary opportunity to pay tribute to our heroes who have given so much for our nation. These special coins will honor our Purple Heart recipients’ service and sacrifice, and help the National Purple Heart Honor Mission expand its programming to ensure our combat-wounded veterans and those killed-in-action are remembered for generations to come. We look forward to working with the U.S. Mint to create a coin series that is truly emblematic of our heroes. We also thank Congressman Maloney and his staff for their work in making this unique tribute a reality,” said Col. Russ Vernon (U.S. Army, Ret.), executive director for the National Purple Heart Honor Mission.

The National Purple Heart Hall of Honor Commemorative Coin Act authorizes the U.S. Treasury to mint $5 gold coins, $1 silver coins, and half-dollar clad coins at the United States Mint at West Point for the 2022 year. After production costs are recouped by the U.S. Treasury, proceeds from sales of the coin will be directed to the National Purple Heart Honor Mission, Inc. Those resources will help the organization augment their “Honor Flight style” Purple Heart Patriot Project program and create a new Mobile Tribute and Education Center that will visit communities across the nation bringing the story of the Purple Heart to a whole new generation of Americans.

The Purple Heart is one of the oldest and most recognized American military medals, awarded to service members who were killed or wounded by enemy action. General George Washington named West Point the most important strategic position in America during the Revolutionary War which is when the military decoration first originated. The National Purple Heart Hall of Honor’s mission is to collect and preserve the stories of Purple Heart recipients from all branches of service and across generations to serve as a living memorial to their sacrifice.

1,323FansLike
1,085FollowersFollow
5,832FollowersFollow
© Copyright © 2006-2021 Hudson Valley Press. All Rights Reserved. All rights reserved. | Use of this site indicates your agreement to the Terms of Use and Privacy Policy for our Site.