NEWBURGH – Newburgh Free Academy Celebrated their 156th Commencement Ceremony on Thursday, June 24th at 4:00pm on Academy Field. Graduates and their guests celebrated under a clear, sunny sky after a year and a half of uncertainty, unknowns, and challenges as the world navigated the COVID-19 global health pandemic. The Class of 2021 graduation ceremony was one of the first events of “normalcy” in quite some time as the Governor of New York, Andrew Cuomo, fully lifted the ongoing state of emergency that day. 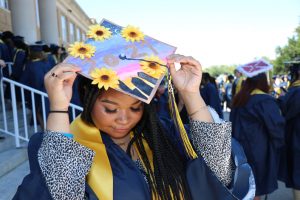 A highlight of the ceremony occurred when special guest, a gyrfalcon named Daredevil, flew over the graduates as a symbolic gesture of how they can soar beyond Academy Field. The gyrfalcon was coordinated and called for by co-principal Mr. Matteo Doddo. The gyrfalcon was released by Master Sergeant Christian Granda, an ROTC teacher at NFA. The mascot for Newburgh Free Academy is a Goldback, a fictitious bird with a legendary history. Daredevil, a gyrfalcon, is an arctic species and is trained to do educational programs throughout the northeast through Skyhunters in Flight by falconer Brian Bradley. 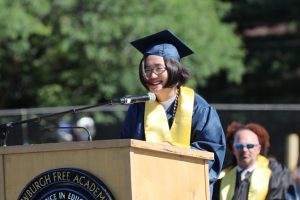 The NFA Drumline and City of Newburgh Police Motorcycle Division led the traditional procession from the pillars of Newburgh Free Academy, down South Street, and onto Academy Field. The NFA Madrigals, under the direction of Ms. Jillian Caci sang the Star Spangled Banner as the NFA JROTC cadets raised the flags. The musical group also sang the NFA Alma Mater (Yellow and the Blue) and the Senior Song, When We Were Young by Adele. Ms. Monica Antonelli-Guido and Dr. Paul Caroll accompanied the Madrigals.