NEWBURGH – Alfonza Marshall literally took a walk down his childhood memory lane Sunday afternoon and couldn’t have been happier to have navigated the precious 2.8 mile stretch that continues to mean so much to him many years later.

Marshall, who now resides in Georgia, was part of a large crowd of people who participated in the Habitat for Humanity of Greater Newburgh’s Annual Walk event (in memory of Mayor Judy Kennedy), aimed at raising critical funds for the not-for-profit organization that offers a “hands-up” for home ownership. The long-time City of Newburgh resident Marshall, who eagerly pointed out and told intriguing tales connected to his elementary school, favorite bike riding spot and even homes of friends made over 40 years ago during the nostalgic walk, had several months back inquired about purchasing his former 187 North Miller Street residence, only to discover it was being renovated by Newburgh Habitat to become available to one of their homeowner recipients. The news immediately brought a smile to Marshall’s face as well as a pressing need to sign up for the Walk, contributing in any way possible to the organization that has provided priceless home ownership to so many.

“It made me very happy someone less fortunate will now have the opportunity for home ownership,” said Marshall while walking through his childhood streets, laden with fond memories. “This City, my street, and neighborhood were all such great places to grow up in, and I’m excited that other children and people will be able to experience that; I also want to volunteer with the renovation, as it would be really special in many ways.”

It’s those types of powerful stories and deep connections that were apparent among so many who took part in the Annual Walk. Each person making either the 1.8 or 2.8 mile foot trek through the City of Newburgh, admiring both the completed and in-progress Habitat Homes, seemed to be walking with an intent, a purpose, oftentimes a personal one.

“My mom and nephew came to this very neighborhood several years ago when it started up and I volunteered with my nephew working on these houses right here,” said a proud Jacqueline Mayo of the City of Newburgh as she made strides through one of the initial neighborhoods dotted with Habitat homes. “I recall it being a lot of work but also very, very rewarding, and I wanted to return here and see the progress that has been made and am so happy to see how beautiful it is with people living in and maintaining them so nicely, which has made everything else around them so much more beautiful.”

That beautification has extended to many pockets of the City of Newburgh over the years. Two years ago marked the completion of the 100th Habitat for Humanity of Greater Newburgh home as well as passage of key to its homeowners. Soon after, the Pandemic hit, halting further construction; however, although home tallies were thwarted, other crucial intangibles regarding the imperative nature of as well as motivating energy toward home ownership spiked. 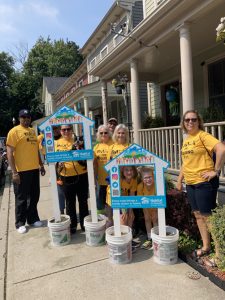 “A positive impact of COVID has been that housing and home ownership conversations are happening more than ever, both on a local and national scale,” pointed out Matt Arbolino, Executive Director of Habitat for Humanity of Greater Newburgh. “We are looking at a world where more people recognize the importance of a home, and it’s about time our communities came together to support each other.”

That support could be seen throughout the grounds of Washington’s Headquarters, where signs of over 10 housing sponsors- including; Barton Chevrolet, Morgan Stanley, and Dr. Michael Koumas were visible as were a bevy of passionate volunteers who could be spotted raffling off gift baskets, providing drinks and refreshments to walkers, handing out tee-shirts or just plain sharing positive stories about the amazing power of a community coming together, helping to make elusive home ownership a very real, tangible reality for so many, changing their lives forever for the better in the process. So, although Sunday’s Annual Walk- which also offered a virtual alternative- was a hands-on, up-close- and personal way to see several of the beautiful homes that Habitat has added to the City of Newburgh’s landscape over the years, its impact was felt on so many more levels which are likely to resonate with all who attended for a long time to come.

“We can call this Walk a pilgrimage in many ways,” said Cathy Surgenor, a Reverend at Hudson River Presbytery. “Today we walk with a purpose and spirit for what has been accomplished, will continue to be accomplished, to share stories and have fun by all being together.”

1,338FansLike
1,085FollowersFollow
5,878FollowersFollow
© Copyright © 2006-2021 Hudson Valley Press. All Rights Reserved. All rights reserved. | Use of this site indicates your agreement to the Terms of Use and Privacy Policy for our Site.