NEWBURGH – The list of titles is long and impressive: Thinker, designer, architect, writer, horticulturist, trailblazer and so much more. Whatever the field of work or contribution, Andrew Jackson Downing left an indelible, priceless footprint on the City of Newburgh as well as the entire Hudson Valley.

It was in that very spirit that a determined group of people, led by Joan Porr. Project Organizer and Coordinator of the effort, embarked upon an unwavering mission to ensure a historic marker was erected, commemorating Jackson’s lasting legacy. And so, Friday, at the very spot, Downing Park, named after the man himself, a shiny, new strikingly blue and yellow historic marker was uncovered in front of a crowd of ardent supporters. The impressive piece was later moved to its permanent residence, 355 Grand Street in the City of Newburgh where it can be viewed and appreciated by all.

That gratitude for Downing and all he stood for and accomplished runs deep for many. In his short 36 year life, spanning 1815-1852, Downing was able to leave a lasting imprint on American Landscapes and Architecture. It was a durable force that rippled throughout not only the Hudson Valley, but the entire country. Locally, his architectural designs as well as horticultural stamp can be viewed in Newburgh as well as nearby Fishkill. His advocacy for landscaping and gardening for all people, along with charming personality, won him an array of supporters and admirers. With only one other Downing marker in known existence in Newburgh, the newly established one is well overdue and much deserved.

“Jackson was so much more than an architect; he recognized that the Hudson River Valley is like nowhere else on the planet, and he used his ideas to inspire others,” said Keynote Speaker, Alan Strauber, Program Coordinator and Founder-Historic Preservation Certificate Program, Westchester County Community College. “It was right here in Newburgh where he did his work as a thinker, designer, writer, horticulturist and so much more; he adapted the idea of American individuality, and that the form of one’s house should reflect the character of the person in it. “ Strauber, who teaches United States History at Marist College, continued about Jackson, “He died at 36 years of age; who knows what he would have accomplished with more time, and so today we honor him with this Marker and see that the his influence is still with us to this day.” 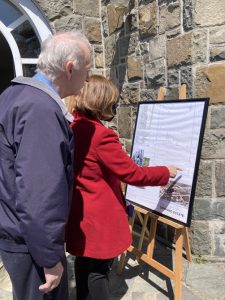 That effect was apparent in the large turnout witnessing the Marker unveiling. It was a sight that produced a smile on Porr’s face as she welcomed them to the event.

“You are in good company if you are here today,” said Porr, a major force in inciting and carrying out the Marker’s production. “It shows that you really care about parks, horticulture and agriculture. Surveying the growing beauty and commitment to care for her Downing Park surroundings along with the diverse mix of its patrons, Porr added, “I think Newburgh is taking a turn for the better.”

It’s a vision that would have made the man, Downing himself, very proud, resonating with the priceless impact of one of his many famous quotes.

“Plant spacious parks in your cities and unloose their gates as wide as the gates of morning to the whole people.”