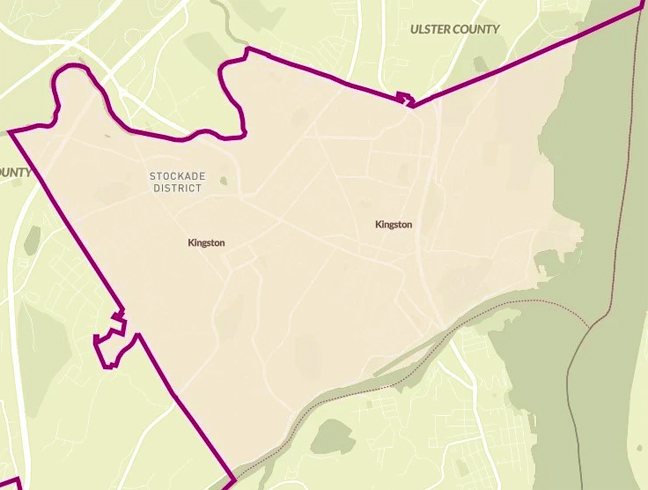 New York’s final congressional and Senate redistricting maps were released in the early hours last Saturday, finalizing the controversial process. Kingston Mayor Steve Noble, Assemblyman Kevin Cahill and Ulster County’s election commissioners criticized the new map last Tuesday. “When a small city is divided – especially by jagged, irregular lines – it makes government harder to access and it distances people from their government unnecessarily. Keeping the City of Kingston unified, in either district, is more important than one district having a few thousand more people in it than the other,” they wrote in a statement to Supreme Court Justice Patrick F. McAllister.

When New York’s Court of Appeals struck down New York’s Legislature-drawn maps last month, the ruling sent the maps back to the drawing board. Court-appointed special master Jonathan Cervas set about restructuring the districts, leading to the current and final maps that no longer splinter the city of Kingston. In response to the previous redistricting maps draft, Assemblyman Kevin Cahill argued in a letter to the judge that the division would disenfranchise minority populations. “Splitting Kingston up and then separating part of it from other nearby diverse municipalities such as Ellenville, Poughkeepsie and Newburgh will, in effect, dilute the voices of communities of color throughout the Hudson Valley,” Cahill wrote.

The special master’s splitting of Kingston into two congressional districts in his proposed maps also raised concerns about weakening the voting power of diverse voters. The proposed map put much of the 24,000 residents in the 18th District, which included parts of Ulster and Dutchess counties and all of Orange County. The rest of the city went to the 19th District, a stretch of rural area that reaches from the Massachusetts border to the Finger Lakes.

The 19th District is complicated by the fact that Rep. Antonio Delgado, D-Rhinebeck, is soon to resign and be sworn-in as lieutenant governor in Gov. Kathy Hochul’s administration. Ulster County Executive Pat Ryan will now face Dutchess County Executive Marc Molinaro in a special election to serve out the rest of Delgado’s term. The election has yet to be scheduled, but it could coincide with the Aug. 23 primary for congressional races. Ryan last Monday declared his candidacy in the proposed 18th District, which now includes Ulster County, where he lives. That could put Ryan in the unusual situation of running in two races in one day.

“With finalized maps, it’s go time,” Ryan said in a Tweet. “I’m all in to protect Rep. Antonio Delgado’s seat in the upcoming August special election and to win in NY-18 in November. To fight for and serve the community that’s always had my back …”

State Senator Skoufis said on Tuesday, “County Executive Pat Ryan has made clear he intends to run in the 19th congressional district special election, then subsequently turn his attention to running in the new 18th congressional district in August. Given the makeup of this new district and my record of delivering for Hudson Valley families, I felt confident my team and I would prevail in a primary, but it would no doubt leave our campaign in a bruised position with just two months until November’s challenging general election.
“Assemblyman Colin Schmitt, who is also running in the 18th, keeps an unopened bottle of champagne in his bedroom… a bottle he proudly tells people he isn’t opening until he becomes President of the United States. Putting aside the obvious megalomania, Assemblyman Schmitt’s toxic, demagoguing politics must not creep its way into our federal government. This is a man who actively supported the “stop the steal” rally-turned-insurrection.

“With all of this in mind, I have decided to forego a race for Congress this year so a damaging Democratic primary does not provide Assemblyman Schmitt with any undue advantage in the general election. The Hudson Valley needs and deserves solutions, not delusions.”

He concluded, “My family, team, and I are exploring our options and will share a decision by week’s end.”