NEWBURGH – Imagine this: a place you can travel around the world, walk through history, share the past while taking pride in the future, be educated, be entertained, expand views, connect and be inspired.

Sunday, inside the doors of Newburgh’s Temple Beth Jacob, this ideal vision came to fruition for guests to savor. Welcome the first-ever Jewish Museum to take residence in the Hudson Valley. The pop-up event lasted four hours; however despite its short appearance, its impact was profound, laying the foundation for the integral need for something more lasting in the near future.

“We are really hoping to make this first Jewish Museum in the Hudson Valley a more permanent fixture here or somewhere else,” said Stefanie Kostenblatt, Executive Director of Kol Yisrael, Newburgh JCC, whose organization joined together with other local entities for the unifying, well-attended, and exciting inaugural event.

Featuring a host of offerings, including; a Klezmer band, artwork, intriguing artifacts from local and European Jewish history, games, crafts, and Jewish Deli food (featuring corned beef and pastrami sandwiches as well as other goodies,) the Museum, part of the Jewish Cultural Festival, was the brainchild of Mimica Tsezana Hyman, a Newburgh resident, passionate about sharing the history and finer points of Judaism with her community in all ways possible. That heartfelt connection to her religion was noted by Senator James Skoufis, who presented Tsezana Hyman with a special Certificate of Appreciation just prior to the Museum’s official ribbon cutting.

“Mimica has devoted so much time to the promotion of the Jewish community,” said Skoufis. “Today is about a shared collective experience; being Jewish is about so much more than religion, but culture; let’s really fight to make this Museum a permanent thing in the Hudson Valley.”

Evidence of the dire need for such a Museum could be spotted throughout the Temple as large crowds flocked to an eclectic array of offerings from the Jewish community. There was a book, titled SCROLL OF AGONY, The Warsaw Diary of Chaim A. Kaplan to peruse. Host site Temple Beth Jacob displayed a “Sunflower for Ukraine” Poster, complete with details on the supportive, symbolic war gesture. Meanwhile, neighboring Emek Gift Shop was selling chocolates, candles and plates with Menorahs. Nearby, the Jewish Federation of Orange County’s table was providing free books for children ages 9-13. Then there was the moving 75th Anniversary of the End of WW II, honoring liberation, an exhibit whose content came all the way from the Holocaust Museum in Washington, D.C. Photos of those- military and camp survivors- who saw the devastation first-hand of the Holocaust dotted the walls; below them were phone numbers people could call to hear actual recordings of their voices giving the heartfelt testimony to the atrocities. Directly following that exhibit, powerful black and white and color photos, merging authentic Holocaust images with present-day backdrops of their concentration camp sites, provided still further emotionally-charged, educational material. 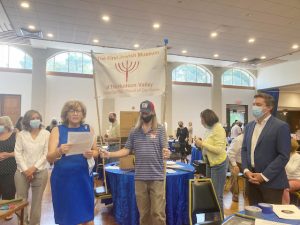 Regardless of the subject matter being viewed, the food eaten, or the conversations that ensued, people were sharing and bonding. The happy scene was exactly how Tsezana Hyman had envisioned the Museum to unravel. In fact, in some ways, Sunday’s pop-up version, although temporary, was even better.

“The pop-up version allowed the people behind the exhibits to be here and explain them to the guests,” pointed out Tsezana Hyman. “This Museum also serves as a memorial to previous generations- our ancestors; it’s a way of keeping them alive, which is especially nice right before the New Year start[ing] next week.”

That ancestry tie was in full, tangible display at the Jewish Family Services of Orange County table, where guests could record their family last names, occupations of their ancestors as well as the year they first came to this country, specifically the Hudson Valley. The hands-on activity was in many ways symbolic of the Museum’s mission: Connecting the present to the past and all the vital threads that weave us together as people.

“We are here today to represent our organization and celebrate the first year of the Museum and Festival,” said Stacy Ocko-Lulkin, a Case Manager with Family Services. “We also want to connect and proudly show our Jewish History doing a Timeline including the Hudson Valley; it’s interesting to see the occupations of different people, and how they have changed over the years.” Reflecting further about the day’s significance as a whole, she added, “This is a nice way for different Jewish organizations to come together and see what they provide for families as well.”

In addition to all the integral reasons- education, connection, history, and inspiration- that compelled Tsezana Hyman to bring a Jewish Museum here for the day and is determined to keep around much longer in the future, she emphasized yet one more.