BALMVILLE – Senator James Skoufis (D-Hudson Valley) presented Balmville Elementary’s Hector Almodovar, Jr., a school lunch monitor and retired NYPD officer, with a Liberty Medal on September 22. The Liberty Medal is the highest civilian honor that a resident can receive from New York State, and is awarded to individuals for exceptional, heroic, life-saving acts. For Almodovar, his immediate impulse to perform the Heimlich maneuver on a choking student saved the young girl’s life.

In April, Mr. Almodovar was working his usual lunch monitor shift when he saw then-fifth grader Ariana Miranda begin to choke while eating an orange. Hector responded immediately, performing the Heimlich maneuver three times, which quickly resolved what could have been a heartbreaking situation; no other adults in the room knew how to administer the Heimlich. 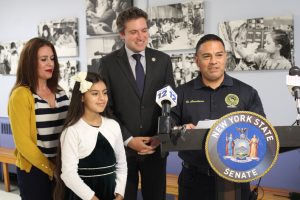 “As a 25-year veteran of the NYPD, Hector has clearly demonstrated a lifelong commitment to safety, and the entire Newburgh community is grateful for his swift action,” said Senator Skoufis. “Ariana is now a vibrant sixth grader with a bright future ahead of her. Had Hector not been staffing the cafeteria when he was, this situation could have ended in terror. I am honored to present him with this Liberty Medal on behalf of New York State in recognition of his going above and beyond to save Ariana’s life.”

“I am honored to accept this award,” noted Mr. Almodovar. “I thank God that Ariana is happy and safe. It happened so fast. Even before this happened, I considered Ariana a part of my family and I treat all of Balmville’s students as if they were my own. I’m just glad everything worked out.”

To award a Liberty Medal, the Senator must pursue a months-long application process and personal approval by the Senate Majority Leader.