This is one of the squad’s most successful years, and coach Lynnece Edmond attributes it to a number of factors:

Having the right resources and support from the athletics department.

The creation last fall of a junior varsity squad. 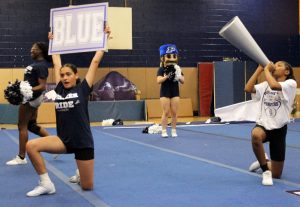 Bringing Pioneer Pete, the district’s mascot, into the routines, which brought some extra points.

“We hadn’t had one (JV squad) in six or seven years, so this year, when we had an injury or something, we were able to move the girls up instead of having to shift routines,” Edmond said.

People, Edmond’s daughter, has volunteered with the team since 2017, but this is her first year as coach. She does a lot of the choreography.

Unsupported image type. At the statewide competition the team had scores similar to its other competitions, but faced more teams, placing eighth in Division B. Edmonds said the team, “takes losses and use them for gains.” So, People looked at what could be done for the sectionals the following week.

“We made some changes to stunting and choreography to use at sectionals to make our routines even stronger,” People said.

Senior Kerice Salmon is one of the 16 squad members. She has been on the team since seventh grade and likes having the younger cheerleaders participate.

“They work hard to make varsity and it makes me be a mentor,” she said, adding that being on the team is like family and teammates helping each other.

Just being on the team helps with personal development.

Salmon said she has gained jobs because of her work on the team. When asked how, she explained: “You have to have teamwork on a job.”

At the sectionals in the first week of November, the team placed fifth. Individually, Salmon and teammate Autumn Bland earned All League and All Section, while Gabriel Anderson earned All League. To do so, each competed individually with about 200 other cheerleaders in Section I, Edmond said.