POUGHKEEPSIE – Poughkeepsie High School’s student athletes were given accolades and awards for their hard work in all types of sports from football to bowling during the annual Athletic Awards on June 8.

Athletic Director Peter Bianco congratulated students on their efforts and touted their commitment to better themselves and everyone else on a daily basis.

“I see the greatest potential here for our student athletes to progress in the best direction possible,” Bianco said. “The athletes and coaches have shown steadfast dedication and passion.”

Bianco encouraged students to work hard in order to achieve their dreams and not be discouraged by naysayers. 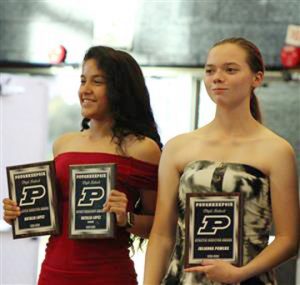 “By persevering, your dream will become reachable,” Bianco said. “Do not let other people speak of your dream in a bad way – if you really want it, seize the opportunity and go get it.”

PHS Principal Kellyann Royce-Giron watched student athletes grow academically and in their respective sports and could not be prouder of them, as well as their coaches. She was especially touched to see the swimming team cheer on and encourage the opposing team at their swim meets.

“That makes me really, really proud,” Royce-Giron said. “We have so much talent across the board.”

Some previous award ceremonies were held off campus, but Bianco found it easier for families to have it at PHS. It also creates a community bond.

“I wanted it to be here to really embrace the school and the community,” Bianco said. “One of my philosophies is bringing the school back and being a community.” 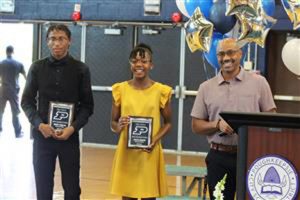 Senior Kareem Muir did not expect to win the Sportsmanship Award in Boys Track, but is proud to receive it. He has proved to be a good sport by accepting any outcome of a race.
“If I lose, I lose,” Muir said. “I don’t get cocky, I just be real.”

Muir encouraged anyone following in his footsteps to stay focused and be positive.
“Honestly, just keep your head up,” Muir said.

Freshman Natalia Lopez received both the Athletic Director and Sportsmanship Award in Softball, which she did to broaden her horizons.

“I just wanted to try something new and I thought softball would be a good choice,” Lopez said.

Seeing her hard work pay off was satisfying for Lopez.

“I’m very appreciative of them,” Lopez said of the awards. “I worked hard to get to where I am now.”