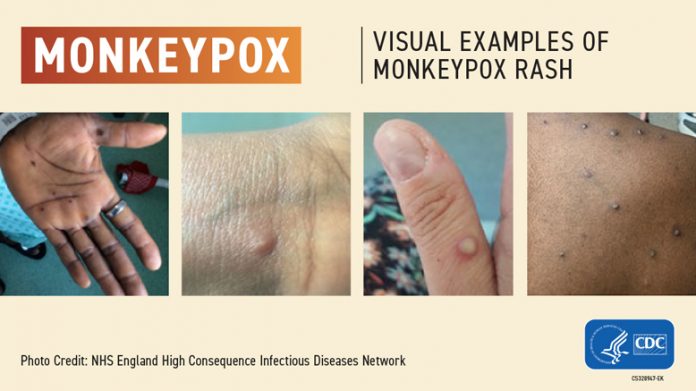 
POUGHKEEPSIE – The Dutchess County Department of Behavioral & Community Health (DBCH) has confirmed a Dutchess County resident has tested positive for Orthopoxvirus/Monkeypox. The positive test has been confirmed by New York State Department of Health (NYSDOH), and DBCH staff is monitoring the individual as well as conducting contact tracing. While patient confidentiality prevents the department from sharing specific details about the individual case, the case does not pose a risk to the general public.

Monkeypox is a rare disease caused by viral infection with the monkeypox virus. Monkeypox virus is part of the same family of viruses as variola virus, the virus that causes smallpox. Symptoms of monkeypox are similar to smallpox symptoms, but milder and monkeypox is rarely fatal. Symptoms of monkeypox can include fever, headache, muscle aches and backache, swollen lymph nodes, chills, exhaustion and a rash that can look like pimples or blisters that appears on the face, inside the mouth and on other parts of the body, such as the hands, feet, chest, genitals or anus. The rash goes through different stages before healing completely. The illness typically lasts two to four weeks. Sometimes, people get a rash first, followed by other symptoms; others only experience a rash.

The CDC is tracking an outbreak of Monkeypox that has spread across several countries including the United States. There have been more than 670 cases reported in New York State, with the majority of those cases in New York City.

DBCH Commissioner Dr. Livia Santiago-Rosado said, “Our department has confirmed Dutchess County’s first case of monkeypox, however the risk to the general public remains very low. While monkeypox has been making headlines, it is certainly not a pandemic and residents should not have undue concern. Staying informed about symptoms, how it spreads and what to do if you are exposed is the best way to stay healthy and safe. We ask residents to remain vigilant about their personal hygiene and take the proper mitigation steps to protect their health. If a resident believes they have contracted monkeypox or are experiencing symptoms, they’re urged to please contact their primary-care physician.”

New Yorkers who may have been exposed to monkeypox in areas with high levels of transmission may be eligible for the JYNNEOS vaccine, indicated for prevention of smallpox and monkeypox disease in adults 18 years of age and older determined to be at high risk for infection.

1,338FansLike
1,085FollowersFollow
5,970FollowersFollow
© Copyright © 2006-2022 Hudson Valley Press. All Rights Reserved. All rights reserved. | Use of this site indicates your agreement to the Terms of Use and Privacy Policy for our Site.
WordPress Ads