Shiroishi said, “I am pleased that so many supporters came out to celebrate the grand-opening of our campaign headquarters. With less than two months to go until Election Day, it’s critical that we reach voters across the 39th to let them know about our campaign and the fact that I am the only pro-choice candidate in the state Senate race.

“As we learned from Rep. Elect Pat Ryan’s recent victory in the Special Election: choice is on the ballot. Ryan has endorsed our campaign because he knows state elections matter. In New York, the Reproductive Health Act only passed in 2019 when the Democrats finally took majority control of the state Senate,” Shiroishi continued. 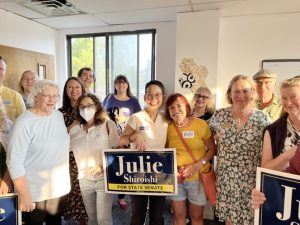 “After the Dobbs decision, not even New Yorkers can take access to abortion for granted and we must fight to preserve the Senate majority and the rights and freedoms that Democrats will protect. New York must remain a bulwark against whatever happens at the federal level as well as a beacon to states where these freedoms are being stripped away.”