POUGHKEEPSIE – “When are we going to do it again?”

Whether it was from students, teachers, parents or children, this excited phrase continually resonated during and after last Saturday’s “Go Nuts for Coding” event, held for around four hours at The Poughkeepsie Mall Galleria. The brainchild of the collaboration between the Computer Science Teachers Association (CSTA) along with Open Hub, led by Yulia Ovchinnikova, the multi-faceted, activity-laden, fun coding event attracted over 200 people, all intensely engaged in critically relevant and growth-driven learning.

“We are all consumers and users of computing technologies because they have become a significant part of nearly every aspect of our lives,” said David Czechowski, a CSTA teacher at the event. “All students should have the opportunity to learn the computational thinking skills necessary to become creators in this digital world.” 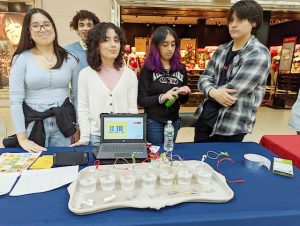 Guided by that energizing purpose, the CSTA crew joined forces with high school students from; FDR, Kingston, John Jay, Beacon, RCK and Ulster BOCES showing youth up-close-and-personal about the expansive, very real relevance of computer science. The center section of the Main Lobby of the Galleria was transformed with 16 tables displaying different unplugged activities, coding books and prizes. Here, about 50 high school students could be seen actively engaging students in a host of activities they produced.

“It was all about students teaching students,” explained Ovchinnikova. “The schools are not providing enough coding; there needs to be much more.”

And the vehicles for that education was bountiful: Treasure hunts, Rubrik’s Cube algorithms, Water Piano, sorting games, robot drawing, magic tricks demonstrations, building the world’s largest emojis with plastic pixels, using beads and string to create a message on a necklace using binary numbers that correspond to ASC II values or playing Makey Makey and other algorithmic games applying logic and computational thinking and problem solving skills. Whatever the activity, each was aimed at introducing computer science concepts and principles through gamified activities, showing all involved how fun-at the core- these processes can be.

The barometer for that fun factor skyrocketed Saturday inside the Galleria. Not only were people already asking about another similar event in the future, but everywhere one looked the energy was off the charts, contagious.

“The event was awesome, and it was wonderful to see so many community members stopping by to see kids engage with computer science, see how it can begin in the elementary years and really be brought to life,” added Czechowski, who most on hand knew his six year old daughter came out to try out almost every demonstration, but weren’t aware of another fact. “The babysitter who was with my daughter is an elementary school teacher with a specialization in computer education, and the reviews of this event from both ‘spies’ was awesome!”