POUGHKEEPSIE – Eleven students from Poughkeepsie High School came together to debate points and work together with Wappingers Central School District students to come up with resolutions during Dutchess BOCES’ High School Model United Nations at Vassar College on December 15.

Students from PHS, John Jay, Ketcham and Orchard View high schools took on the role of delegates representing countries such as the United Kingdom and India, at the United Nations Security Council, developing their negotiating skills and increasing their knowledge of world affairs.

The debate topic was the ongoing war in Ukraine where delegates had to recommend appropriate actions for the UN to consider and then undertake to end the war. They were engaged in formal and informal sessions to freely discuss ideas.

Model UN provides many benefits to students including making clear points and how to debate respectfully with other students they don’t know. Educational Resources Coordinator Audrey Roettgers Wood was impressed how students, who were completely new to Model UN, grasped the concept quickly. 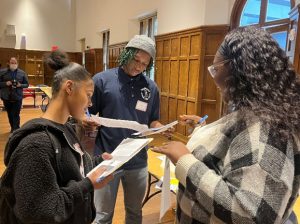 “They’re absorbing what their country’s viewpoints are and trying to hold true to that, while still trying to find ways to negotiate with other countries,” Wood said. “It’s exciting to see how seriously they take their positions and how well they work with one another.”

It was the first time the Poughkeepsie students took part in Model UN which they took two weeks to practice for. PHS Global Studies Teacher Sankung Susso noted that students slipped into the role of delegates with ease.

“It’s a new concept to them,” Susso said. “Now that we’re here and they’re actually participating in it, they’re becoming more and more comfortable with the process.”

Susso was most proud to see his students speak at the podium where they conquered their fears and made their points in a respectful manner. This event serves as a chance for Susso’s students to understand global issues and experience in real time what they’re learning about in class.

“This is an extension of what we do in class,” Susso explained. “It provides them the skills to know how to interact with people with different opinions.”

Senior Daniel Johnson, who represented Egypt, was nervous at first, but easily found his footing during the simulation which he enjoyed.

“I thought it was interesting to try and come to an agreement with all of these countries to make some stance on this issue,” Johnson said. “You can really get into it, whether you have experience or not.”

Model UN provided an opportunity for Junior Geona Burgess, who also represented Egypt, to get out of her comfort zone where she met new students.

“It’s refreshing being able to sit and speak with all these different countries that have different points of view,” Burgess said. “I’ve enjoyed it quite a bit.”