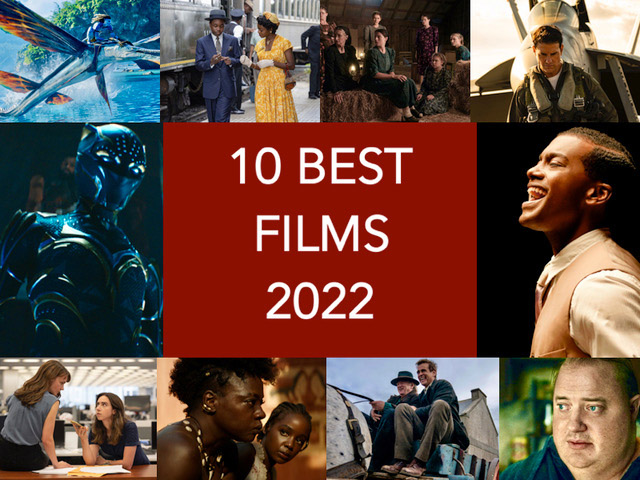 Call it a comeback! In 2022 the movie industry roared back with high-quality films, stellar performances and great artistry. For the record, movie theaters aren’t dead yet and streaming is a part of the equation and not the whole picture.

These noteworthy films and artists will vie for awards in weeks to come. Check out the best in cinema in2022. Enjoy.

Best Feature Films:
Avatar: The Way of Water(****)
A human turned avatar and his family flee from an elite team of soldiers. They find refuge in an ocean-bound territory among amazing sea creatures. Writer/director James Cameron and his tech crew have taken the art of fantasy film to a new level. Nothing you’ve screened previously—not even the first Avatar—can prepare you for the images you will see, journey you’ll take and feelings that will envelope you. The most visually astounding film of the year.

The Banshees of Inisherin(****)
Best friends in an isolated village on a small Irish isle go through a rough patch. Colm (Brendan Gleeson) decides Pádraic (Colin Farrell) is dumb and beneath him. Colm: “I just don’t like you anymore!” Things go awry, escalating into an abusive, emotional psychological war. Writer/director Martin McDonagh magically crafts a toxic bromance for the ages. Layered, perceptive, simple and oafish. It’s a bitter tale that heads down an increasingly macabre path. Farrell’s vulnerability breaks hearts. Gleeson’s relentless vitriol shocks. Kerry Condon as Pádraic’s concerned sister and Barry Keoghan as the court jester and son of an abusive father add to the excellent ensemble acting. Evocative cinematography and a gorgeous score make this is a spellbinding men-gone-wrong fable.

Black Panther: Wakanda Forever (****)
Leave it to filmmaker extraordinaire Ryan Coogler to find the most compelling way to respect the demise of the first Black Panther and eulogize Chadwick Boseman. Both their souls live on in this ingenious and beautiful (cinematographer Autumn Durald Arkapaw) sequel that invites Mesoamerican warriors into the mix. Angel Bassett owns the screen. Tenoch Huerta Mejía introduces a dynamic element. And Letitia Wright holds it down as the legend of the African king becomes an immortal spirt.

A Jazzman’s Blues (***1/2)
Tyler Perry tucked away his light comedy sensibility to create a serious work of art. Two young, star-crossed lovers (Joshua Boone, Solea Pfeiffer) in the deep south try to weather all the complications of racism. But can’t. Perry takes this fated notion to the highest level with a complex and melancholic script that is complimented by exquisite music, art direction, production design, costumes and cinematography. Adult romantic melodramas don’t get much better than this. No wrinkles. No mistakes. Perry the consummate auteur? Who knew?

Till (****)
The very savvy director Chinonye Chukwu and brilliant co-writers Michael Reilly and Keith Beauchamp have respectfully turned the tragic death of Emmett Till into a galvanizing story of courage. The era and places are meticulously recreated. The most gruesome aspects of the incident are wisely recollected off camera. It’s a choice only filmmakers with the greatest sensitively for the subject, family and viewers would make. Till’s murder sparked a new era in the civil rights movement and stirring performances by Danielle Deadwyler as Mami and Jalyn Hall, as her sweet son, keep that history alive.

The Whale (****)
Sometimes a small set, a few actors and a tiny character study are all you need to make a big statement. That’s the case with this intense look at a man battling depression and weight issues. Playwright Samuel D. Hunter wrote the stage play and screenplay. Director Darren Aronofsky transforms the script into a gripping personal drama. Actor Brendan Fraser wears the lead character’s misery and vulnerability on his sleeve. Supporting cast of Sadie Sink, Hong Chau, Ty Simpkins and Samantha Morton surround Fraser and the lead character with love, anger, fear and hope in a fine collaborative effort. Dark and haunting. Quite excellent.

The Woman King (***1/2)
They once were warriors. From the 1600s to1800s, in West Africa, the mighty women of the Agojie militia protected their empire. A highly creative team of female producers, a masterful storyteller (screenwriter Dana Stevens) and a gifted director Gina Prince-Blythewood bring that tale of bravery to a 21st century audience. Viola Davis heads a cast that battles. Well shot and choreographed action sequences impress. The raw emotion and determination on view is enough to make you stand up and cheer. Boldand joyful.

Women Talking (****)
Women talking about what needs to be fixed, becomes an astounding stream of thought for 1h 44m in this consciousness-raising allegory. Wives and mothers in a remote Mennonite community discover they’ve been abused and act on those findings. Canadian writer/director Sarah Polley guides a co-op of brilliant actors who spill their characters hearts out as they contemplate a remedy. Superb acting and dialogue so rich in context you hang on every word. Gorgeous B&W cinematography (Luc Montpellier) with hints of color. A parable for our times.

Best Of The Best 2022
Here’s a roundup of the best performances and artistry from a diverse set of today’s top talent.

Best Actresses: Danielle Deadwyler (Till), Viola Davis (The Woman King), Aubrey Plaza (Emily the Criminal) Emma Thompson (Good Luck to You Leo Grande), Michelle Yeoh (Everything Everywhere All at Once)