NEWBURGH – About 500, mostly local people, came to the formal grand opening of the Resorts World Hudson Valley electronic gaming casino at the Newburgh Mall in the Town of Newburgh last Wednesday.

The facility, in the otherwise mostly vacant mall, is a sister casino to Resorts World Catskills in the Town of Thompson.

Those who attended on opening day were having a good time.

Donna Porcelli of Marlboro enjoyed the experience. “I love it; I enjoy it,” she said, noting she usually has gone to the casino outside Monticello.

Lillian Dyckman of Verplank said she hopes it “works out for them.” 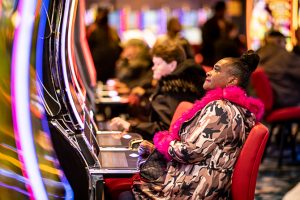 Melissa Lebron of the Town of Newburgh said it reminds her of the casino in Sullivan County but she will probably come to the Orange County facility instead of traveling to the other one.

“I love casinos. It’s nice and close,” said Al Cron of New Windsor, who already won $400.
“Hopefully it brings in the right clientele,” said Dean Schade of eastern Orange County. His wife Kris was “thrilled” that the facility is opened.